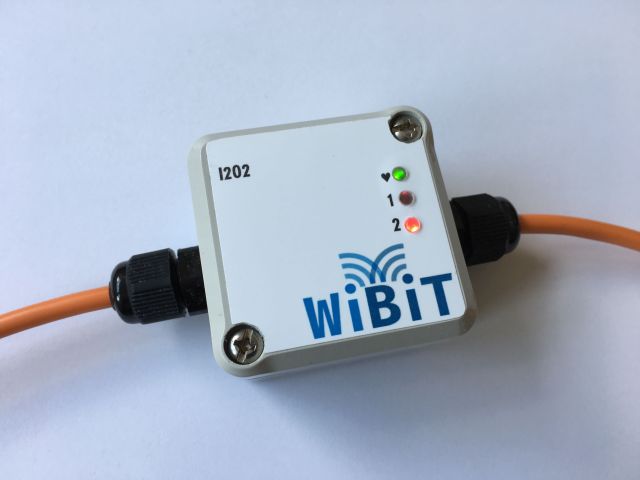 The miniature sensor/aktor solution for the internet of things.

If you want cheap capture or switching :

WiBiT is named from wireless bit, because it connects one sensor (or even two) to the wireless network.

The WiBiT module can be inserted into an existing sensor line.

The powering of the modul is taken from the sensor line, no seperate powering is necessary.

The WiBiT is best suited,
if an existing PLC should not be changed,
if additional sensors are too expensive ,
if new wirering is complicated,
if you want a fast solution or
if you need the signal for a short period
...

The module simply listens to sensor signals, and directs them unchanged and undisturbed to an existing control.

The module can, of course, also be operated without a PLC, then the supply takes place via a cable with M12 plug.

The module connects to any standard WLAN access point. The access data for secure encrypted data transmission e.g. WPA2 are freely configurable. If you want, this is even possible simply by mobile phone

The following protocols are available

This protocol is widely used in industry

Both protocols are supported by SCADA solutions, e.g. KEPWARE

Many other protocols and security solutions are available on request

The inputs are positive switching. The logical polarity is configurable.

The inputs are equipped with a configurable debounce time.

A pulse counter with count value output is available as standard.

The status of the WiBiT and the two inputs or outputs is visualized on the front.

The function of the 3 LEDs is internally programmable.

The WiBit model I2O2 also has 2 digital outputs. These outputs are available in alternative to the digital inputs. The actual state of the output can be read back via the digital input channel.

The switching function is freely programmable. This may be e.g. from a separate input or from a signal of another WiBiT module in the network or from another MQTT subscriber. This will make the system an Internet of Things Network PLC!

The WiBit system optionally has router properties. This makes it possible to use the WiBiTs simultaneously as a range extender. If a WLAN access point is outside the range of WiBiT, a second WiBiT can pass the data and this extends the range.

The system includes an embedded processor. A sourcecode open LINUX operating system is used as a software basis. It is completely maintainable and hardly vulnerable to attacks from outside!

A simple MQTT broker (server) for LINUX / MAC / Windows operating systems with graphical interface. The MQTT broker is used for the networking of a large number of WiBiT modules, and other MQTT IOT modules can also be integrated

In alternativ diffrent MQTT Brokers can be used.

A simple MQTT client for LINUX / MAC / Windows operating systems with graphical user interface. The client is well suited for system testing with the MQTT Broker.

MQTT client APPs for mobile phones (ANDROID, IOS) are available in the respective shops. We would be pleased to recommend you tested APPs.

Further software solutions are under development.

Mail : This email address is being protected from spambots. You need JavaScript enabled to view it.