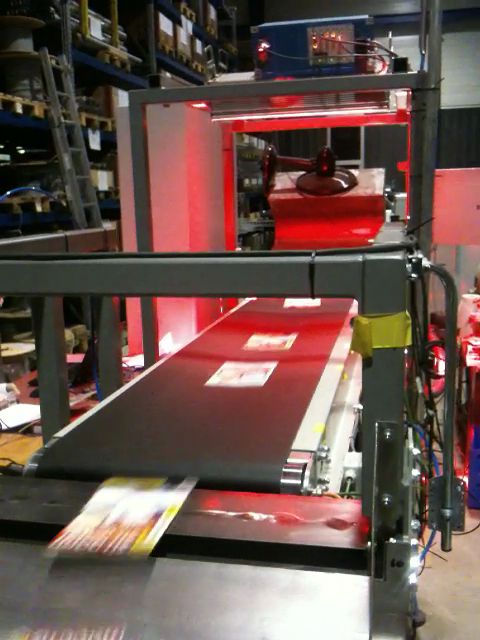 In the magazine market the delivery and order picking is already largely automated.
In contrast, the recording of remissions is a very labor-intensive task.

Because of remission law in this industry unsold magazines must be credited. The retailer remitted his overstock weekly. Banana cartons are commonly used (no kidding) for this task. In these containers magazines are indiscriminately mixed.

The wholesaler is now to capture this mixture pecisely, an thankless task. Each piece is worth money and the retailer must be credited.

Thereafter, 90% of goods go to the recycling and 10% are remitted to the publishers or get otherwise back into sales.

As a rule, hundrets of thousands of titels per week, partly per day, are to be recorded. This is done today with many people at computer workstations.

The increasing concentration in the press industry leads to rising quantities of remissions. Therfore further automation must be considered.

The solution basically consist of a conveyor line to which the remissions are submited. The conveying speed is up to 3 pieces per second, allowing up to 10.000 pieces per hour.

Before the submisson the identyfier of the retailer is caputered via barcode or keyboard by an worker. All subsequent pieces are then credited to this retailer.

It is now crucial that the worker does not have to search and capture the barcode of the piece, whereby a maximum of 2000 could be processed per hour.

This task is done by cameras now, reading both sides of the magazine in flyby.

The new F&J realtime database server decides within milliseconds whether the piece belongs in recycling or should be collected.

The conveyor technology automatically sorts more than 90% of pieces for recyling or storage.

At the same time the detected pieces are of course credited to the retailer.

But with up to 10% no barcode is readable or available, these pieces had to be recorded time-consuming by hand, until now.

Again Fränz & Jaeger offers an innovative solution. The images of the pieces provided by the scanners
are stored on the F&J FKOD remote coding server in real time. A newly developed image recognition module detects
the covers of magazines automatically and also the retailers are immediately credited.

It remains only a small residual amount of images that can not be assigned by the server. For example, because the cover has not yet been learned or because it is a problematic image. This residual amount is then carried out on workstations and entered manually. It does not matter at what time the recording has taked place,
because the images are safely stored.

The system is supplemented by individual work stations, where not conveyer capable goods can be entered manually.

The Linux-based real-time server PGR15-RTDB and PRG15-FKOD of Fränz &Jaeger are redundant. That all aquiered data and all images are mirrored in real time on a second identical machine. If one server fails, it is losslessly and automaticaly switched to the redundant server, and production continues.

The system will be expanded soon to 5 lines with a daily capacity of up to 400000 remission.

With the F&J remission acquisition system PGR15 high volumes with minimal personal expenses are handled, while retaining high reliability of the entire system.